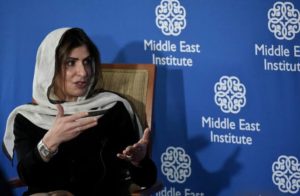 A year after landing in jail without charge, her mercy plea unanswered by Saudi rulers and in fear of a coronavirus outbreak behind bars, a prominent princess did the unthinkable — and went public.

Last month, her Twitter account sprang to life with a letter from the princess claiming she had been “abducted” and “thrown into prison” along with her 28-year-old daughter, Suhoud al-Sharif, and imploring King Salman and his powerful son Crown Prince Mohammed bin Salman for help.

The letter, a rare public appeal from a member of the secretive royal family, voiced fears that her “deteriorating health” in Riyadh’s high-security Al-Ha’ir prison — known for holding terrorism convicts and political prisoners — could result in her death.

Two sources close to her family told AFP the account had been briefly hacked “by someone in Saudi Arabia”.

“Since the tweets, there is no more contact; no signs of the princess or Suhoud,” one of the sources said.

“No more phone calls, nothing.”

The family’s fears have been further amplified by concerns over a possible outbreak of the novel coronavirus inside Al-Ha’ir.

Allowed one weekly telephone call before the tweets, Suhoud told her family that prison authorities had sounded the alarm that coronavirus cases had been detected inside the facility.

A prison employee separately confirmed to the family that there were a handful of COVID-19 cases in Al-Ha’ir, the sources said.

Authorities in Saudi Arabia, which has reported more than 25,000 coronavirus infections so far, did not respond to a request for comment.

The government has said nothing publicly about the princess’s detention.

The case, which spotlights what observers call increasing repression under de facto ruler Prince Mohammed, is the latest sign of turmoil within the royal family following the detention in March this year of King Salman’s brother and nephew.

The youngest child of late King Saud bin Abdulaziz, Princess Basmah was preparing to travel to Switzerland on a private jet in March 2019 for medical treatment when a group of men claiming to work for the king showed up at her Jeddah penthouse.

They said they were there to escort the princess for a private meeting with the monarch, according to the sources. Unwilling to let her mother go alone, Suhoud accompanied her.

They were taken straight to Al-Ha’ir.

Security footage of that encounter provided by the sources shows the men — burly and armed with pistols — before they moved to cover the surveillance cameras with pieces of cloth.

In written testimony to the United Nations, seen by AFP, the family said Princess Basmah’s detention was likely due to her “record as an outspoken critic of abuses in our country” as well as her enquiries about a fortune belonging to King Saud that is frozen by the state.

They fear the arbitrary detention without any criminal charges is an attempt to “get rid of the princess”, the document said.

She was also deemed an ally of former crown prince Mohammed bin Nayef, who was replaced as heir to the throne by Prince Mohammed in 2017, the written testimony added.

Prince Nayef and Prince Ahmed — the king’s brother — were detained in a separate royal purge in March.

The government has yet to officially comment on the crackdown, which observers say is an attempt to stamp out dissent and enforce absolute loyalty within royal ranks to Prince Mohammed.

Princess Basmah suffers from numerous health issues including osteoporosis and severe gastrointestinal problems, according to her medical records seen by AFP.

The sources said she has been denied medical treatment in jail.

Her detention in a notorious prison is unprecedented in Saudi Arabia, where royal family members are typically held under house arrest or detained in luxury villas or hotels.

Her family has issued a new appeal for her release in the Muslim holy month of Ramadan, which began in late April.

But her troubles may have only increased after her Twitter plea — an unusually bold move by someone from the kingdom’s sprawling royal family, comprising thousands of members.

Private entreaties — not public petitions — are considered the safest way to navigate the opaque justice system in the absolute monarchy. Saudi authorities are highly sensitive to criticism in public.

But her plea came after private letters making the same appeal to the king and crown prince, seen by AFP, went unanswered over the past year.

“There was no response at all, total silence,” one of the sources said.